This is a just a short notice to state that all my “Perilous Adventures” levels will be exclusive to this site only and that they are not be hosted anywhere else.

The reason for this is that after a decade of TR level editing I want to create something new with my own characters. I feel that Tomb Raider level-editing sites should only be for projects with Lara Croft as the heroin.
Posted by Unknown at 03:44

While my custom projects will still be linked to the original Tomb Raider games fictional 'universe' and background, they will now take place during the 1920s/ 30s. This being the case, all of my future levels are going to feature a new character called Melissa Goldfeld. Here is some information about her and some the other new characters. More will be added later as my project proceeds. 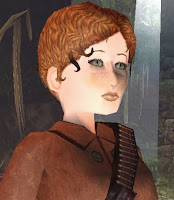 Our new heroine is an American agent working for a special unit that was set up by President Theodore Roosevelt to investigate ancient mythology and the paranormal. A former circus performer, she was recruited for her agility and excellent ballistic skills which make her an invaluable field agent. Although not an academic she is tenacious and a keen learner. 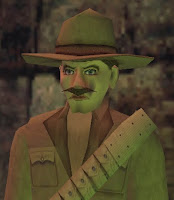 Inspired by the early protagonist of the original tomb raider before being replaced by Jacqueline Natla. Arthur Hamilton Graves is a former colonel in the British army who is now a mercenary and adventurer. Like Melissa, he is a member of the agency although his motives for joining remain a mystery. He is known as a strict authoritarian and staunch capitalist who expects the best from the other agents who work under him. 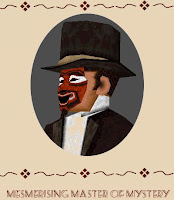 An ominous figure from New Orleans who is shrouded in mystery. He appears to be an Entertainer and Magician with an entourage of followers. His true identity is unknown for he always wears a comical mask. Many suspect him to be the leader of a sinister cult in the Deep South. Those that dare to oppose him do not last long and quickly 'disappear'.
Posted by Unknown at 11:28

Screencaps of the project.

I started to work on PA (Perilous Adventures) during CoyoteCreek2 while waiting for the beta test so I already have some decent screencaps of the levels to show. The Spanish mission was an idea I had for CC2 but it ended up in this project instead. The original idea was the battle for Coyote town was to take place at a mission but it would have been too much in addition to the town.


My first Perilous Adventure project is going to be similar to my "TR4 goldfading light" and although it has some of the same themes, it is going to be a very different project. I felt I needed to cover my favourite locations first since they are rarely featured in other TR games when compared with the likes of Egypt, Greece, etc. I feel they still have a lot to offer and that my first  Perilous Adventure will be something special.

Project Synopsis,
Melissa Goldfield is an American agent working for a special unit investigating ancient mythology and the paranormal. She is currently looking for a fragment of an artefact that was said to be hidden at an old Spanish mission shortly before the Texas Revolution. She has been assigned to Captain Morris of fort Granger who will guide her there. Revised synopsis coming soon...

The Levels
Although this is subject to change the projects levels will be:
Level one-The San Pablo mission

A Spanish mission in Texas.


Level seven- Carnival of Cadavers
The gang's Caribbean island. Melissa and company will be up against the cult, a hoard of zombies and more!